The F-22 simulator avionics approximates the Spiral 3 avionics baseline as defined by the F-22 team. Only the unclassified public release displays needed for navigation and tactical engagement are modeled at this time. This includes symbology for the navigation, air-to-air and air-to-ground modes displayed on four color Multi-Function Displays (MFDs), standby flight group and communication pages on the Up-Front Displays (UFDs), and navigation and tactical symbology on the Head-Up Display (HUD).

The aero and propulsion systems use a basic 6-DOF model which is representative of this class of aircraft.

Air-to-air weapons flyouts include low-fidelity AIM-9 and AIM-120 (AMRAAM) missiles using basic physics modeling and unclassified information from public websites. A Head-Up-Display (HUD) plug-in is provided with this entity, which when used with MetaVRTM or other compatible visual scene software will render the F-22 HUD symbology for pilot navigation and weapons engagement.

The images below depict the virtual cockpit displays in the air-to-air avionics mode using a touch-screen as an interface. 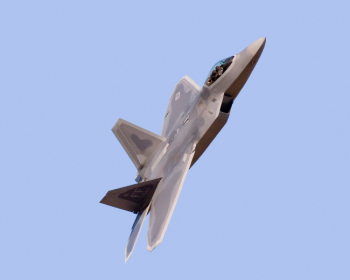 For this implementation a MetaVR visual scene channel was set up as a SAR map video channel. This represents a future capability to add better air-to-ground sensors and weapons capabilities to this platform. CBA's customization facilities make it perfect for performing this kind of "what if" simulation.

This is a block of text. Double-click this text to edit it.