The U.S.Army Air Maneuver Battle Laboratory in Fort Rucker, Alabama made an urgent request to ZedaSoft to develop a version of the OH-58 Kiowa Warrior that could demonstrate a new nose-mounted sensor (NMS) system integrated into the standard Mission Equipment Package (MEP).

This platform simulation was developed in three months by five software engineers, and was integrated into a full cockpit with controls and multi-channel visual system in the fourth month. Two OH-58D simulators were delivered in January 2010, and were successfully used for the Analysis of Alternatives study directed by the Pentagon for Manned/Unmanned aircraft alternatives in February and March 2010. Viable research results were published on May 6, 2010. 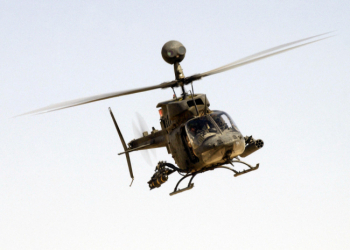