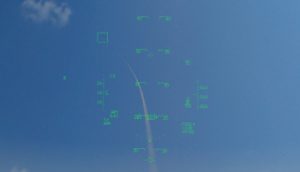 An F-16 Hud with AIM-9 weapon delivery symbology. The HUD is a plug-in to MetaVR's visual scene. Both the HUD and the visual scene are driven by CBA.

The interface includes the ability to drive the various sensor channel configurations to simulate Night Vision Goggles (NVG), Infrared (IR) BHOT/WHOT, and Day TV modes. A SAR map and ground map radar interface is also supported, providing realistic SAR and ground map radar returns to the host platform simulation. All of these modes are supported from the same database, providing exact correlation between the Out-the-Window (OTW) scene, the visualsensors and the radar sensors. The ZedaSoft F-16 entity uses all of these interfaces to simulate an F-16 mission using a targeting pod and the APG-68 radar for target acquisition. Height above terrain (HAT) and line-of-sight (LOS) ranging requests are fulfilled either through the standard channel interface, or through off-line database terrain interrogation. The MetavR interface has been used and proven in many ZedaSoft simulator solutions for over 10 years.

This is an example of driving sensors into the cockpit through MetaVR's interface.

Interfaces to other commercial and proprietary visual scene software systems can be provided as custom software support contracts.