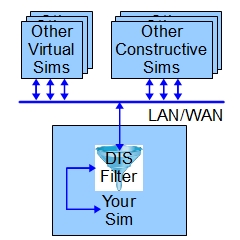 The DIS (Distributed Interactive Simulation) Filter/Router product is a user-customizable set of components used to manage the number and types of Protocol Data Units (PDUs) arriving on a network or delivered to a particular live/virtual/constructive system.

Some virtual and constructive systems cannot handle large numbers of PDUs on the network in exercises that have large numbers (>10,000) of entities. The DIS Filter/Router allows these systems to participate in the exercise without being overwhelmed by too many PDUs. The DIS Filter/Router limits the number of PDUs arriving at the system in user-configurable ways. For example, a high-flying fighter does not always need to be concerned with soldiers on the ground that are far away. A simple PDU filter chain could be set up that ignores soldiers that are more than 100 miles away.

Who is using the DIS Filter?DIS Filter Q&AWhat is DIS?

There are two typical configurations for the DIS Filter:

The DIS Filter/Router can be run on the same computer as your simulator by providing separate DIS exercise ID, port number, and IP address configurations, but this is not our recommended configuration, especially for large exercises.

The DIS Filter/Router is configured via XML, making it easy to customize it for your particular DIS exercise and/or simulator requirements.
Standard PDU Filters include:

Who is using the DIS Filter?

We have a number of customers using the DIS Filter. The Army's Air Maneuver Battle Lab currently filters over 80,000 entities and related PDUs on very large networked exercises. The filter limits the entities visible to the OH-58D Simulators to about 4,000 entities. ZedaSoft integrated these simulators with the OH-58D entity using our CBA® for Simulation framework.

How many PDUs will the DIS Filter handle?

It has been tested with up to 8,000 PDUs per second. The Army's Air Maneuver Battle Lab pushes the DIS Filter/Router the hardest, and uses it on a network with thousands of DIS entities where the simulator network receives up to 4,000 PDUs/sec.

What computer does it run on?

We recommend that DIS Filter/Router be installed on a separate computer in large networked exercises. We can provide a DIS Filter/Router appliance preconfigured for your network. Currently, the DIS Filter system is only supported on Linux but has been tested in Windows. The computer needs to have two physical network interfaces to allow it to connect to two networks and do its filter job. Any dual core Intel/AMD CPU with 2GB of RAM or more and 10GB of disk space will do.

What else do I need to use the DIS Filter?

You need a CBA for Simulation license and Sun Java 5+ JRE installed.

Distributed Interactive Simulation (DIS) is an open standard for conducting platform-level war gaming across multiple host computers, and is defined by the IEEE 1278 family of standards documents. Wikipedia has an informative introduction to DIS. DIS improvements and standard DIS enumerations are managed by the Simulation Interoperability Standards Organization (SISO).